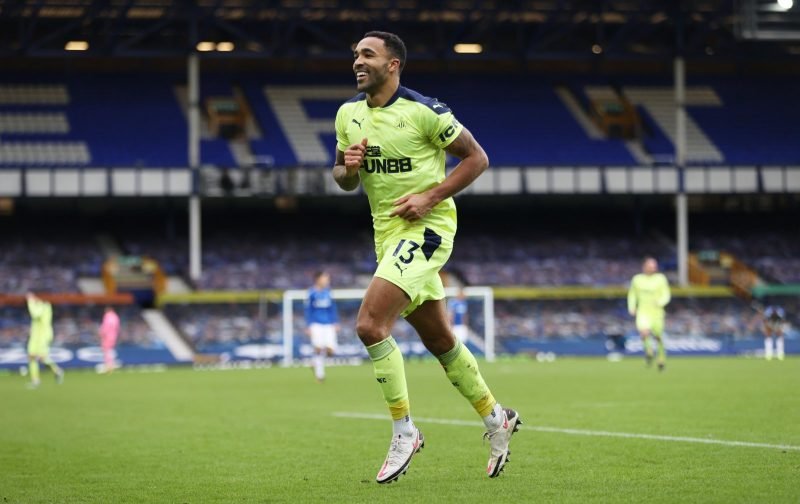 Newcastle United beach coach Steve Bruce has hinted at the possibility of the Magpies’ top scorer Callum Wilson being included in his starting 11 for the upcoming game against Arsenal.

Wilson picked up an injury in the 3-2 win over Southampton back in early February and his recovery has seen him limited to time on the pitch via the bench but it seems he is ready for a starting role.

The lack of performance from Brazilian flop Joelinton in the 1-1 draw at Anfield should make Bruce’s decision an easy one; if Wilson is ready to start, he starts.

In the ex-Manchester United defender’s pre match press conference he was asked the question whether his most lethal goalscorer would be likely to make a return for the game against Arsenal and this was his response:

“We’ve waited patiently, which was important. The more confident you get with a hamstring that you can get to full pace is important and the way he burst through against Liverpool was typical Callum.

The moment in the game referenced by Bruce is the lead up to Wilson wrongly being denied his first goal back. He showed true strikers movement to get into the position and pace and power to go one on one with Alison in the Liverpool goal before demonstrating strikers instinct when staying alert for the rebound and forcing the ball into the unguarded net.

These are all things that Joelinton lacks when attempting to lead the line and it’s these things that Wilson can bring to the side from the off against the Gunners.

Arsenal’s defence is a bit suspect to say the least and with key players likely to be left out as a result of their Europa League semi final second leg coming up, I believe that Wilson can cause some serious damage.