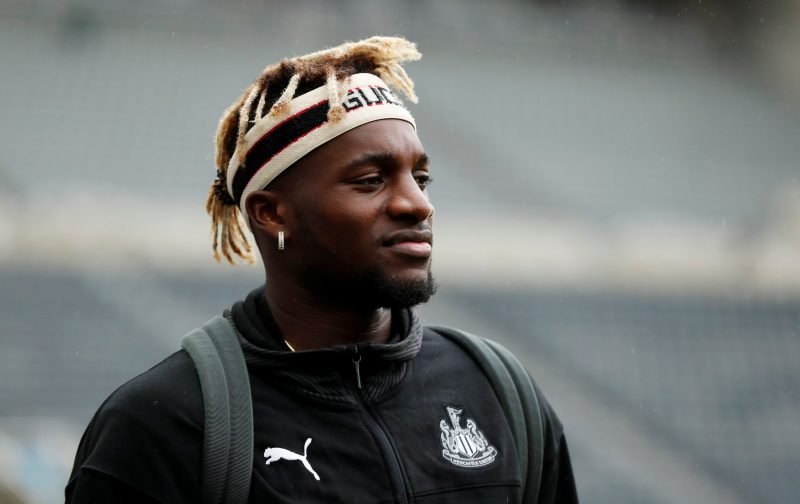 Newcastle United beat Manchester United 1-0 on Sunday thanks to Matty Longstaff’s debut winner, and all of the attention was deservedly on the 19-year-old, but special mention needs to go to Allan Saint-Maximin.

The 22-year-old with a Gucci headband and bright blonde hair – he certainly stands out, but it is not just his style that is outlandish.

His ability on the ball is also pretty unique as he sees himself as an entertainer; he has admitted in interviews since joining Newcastle that he wants to entertain the fans, and on Sunday, he certainly did that.

Saint-Maximin was a real livewire all game, and his direct running led to the opening goal.

From a Manchester United corner, Newcastle broke away and scored it was a brilliant move, and Saint-Maximin was crucial to it.

Miguel Almiron played a delightful pass to the French winger who turned and drove past four red shirts before timing his layoff to perfection to find Jetro Willems – who found Matty, and he buried it.

It will not go down as an assist for the former Nice man, but without his burst of pace, Newcastle would not have scored.

This was only the 22-year-old’s second start for the Toon, but he could be exactly what they need to become an effective counter-attacking side.

Saint-Maximin is confident on the ball and wants to be as direct as possible. If he is given the space, he could be devastating.

He has already been compared to former Toon favourite Hatem Ben Arfa, and there are clear similarities between the mercurial wingers.

If Saint-Maximin can add goals and assists to his game, then Newcastle may well have signed a bargain.

What is certain, though, is that Saint-Maximin will entertain the St James’ Park faithful.