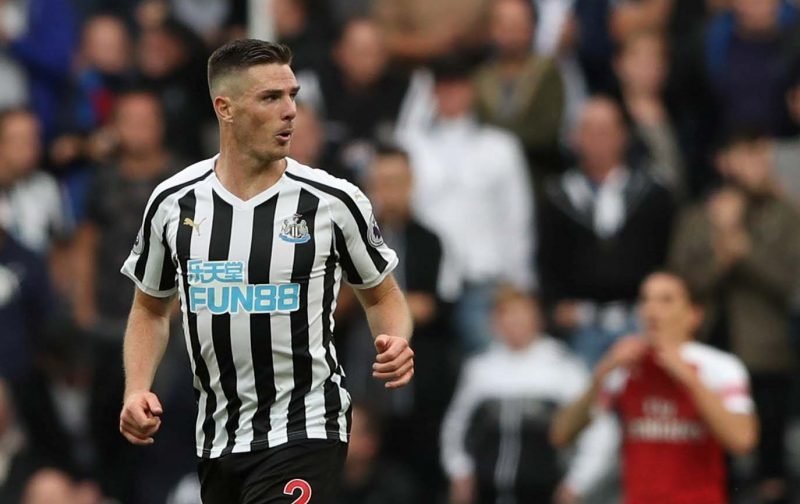 Newcastle can afford to part ways with Republic of Ireland defender Ciaran Clark amid reported interest from Crystal Palace and Bristol City.

According to The Sun, the £35,000-a-week defender could be a target for Crystal Palace before the summer window closes, as Roy Hodgson is keen to see his Eagles add two first-team options before the market slams shut.

The former England manager is intent on boosting his core defensive numbers having relied heavily on Mamadou Sakho and James Tomkins last season, and is still on the hunt for a new right-back following Aaron Wan-Bissaka’s move to Manchester United.

Hodgson is yet to decide on what basis he will pursue Clark, if at all, with the 29-year-old a potential target for a loan or permanent deal, which would allegedly see Newcastle request close to £5million.

Clark may also be heading to the Championship this summer, with the Chronicle noting that United chiefs have fielded enquires from Bristol City and informed the Robins that they would request a fee in the region of £6m to £7million.

Clark was a rarely-seen figure on Tyneside under Rafa Benitez having made eleven Premier League appearances during the recent campaign, and would be expected to continue on as a reserve option if he were to leave St James’ Park for Selhurst Park and join Palace.

Newcastle accepting a £5m to £7million permanent offer for the 32-cap international should not be opposed, as it would be unlikely that the 6 ft 1 defender would be in line for a greater role under Steve Bruce next season.

Jamaal Lascelles, Fabian Schar and Federico Fernandez should all be ahead of the 29-year-old in the new gaffer’s pecking order, and Clark will only fall further behind once Florian Lejeune returns from a knee injury.

Paul Dummett can also cover the lower-pegs of the pecking order in central defence and offer depth at left-back, where Paris Saint-Germain’s Stanley Nsoki will be pushing for minutes should his rumoured €11million (£10m) move go through.

Harrow-born Clark’s Tyneside future, therefore, is riddled with question marks over his playing time, and with two-years to run on his £35,000-a-week contract, United have no reason not to accept a suitable permanent offer.