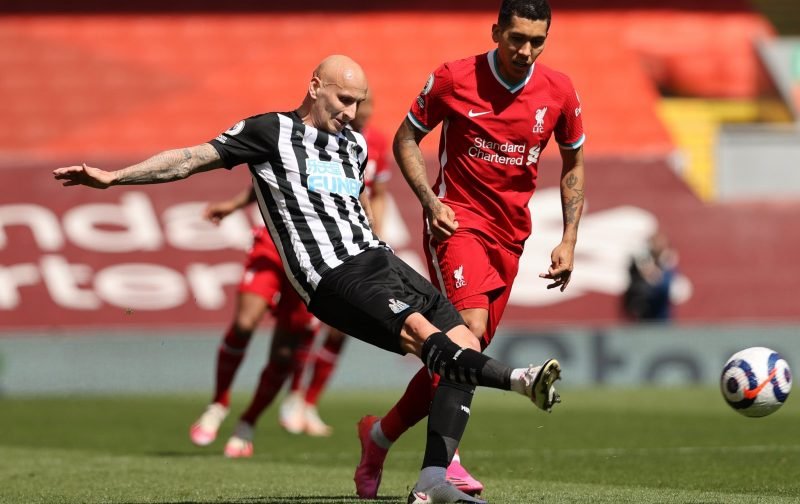 One thing that many Toon fans may have noticed during the 1-1 draw with Liverpool was Jonjo Shelvey being deployed in a new role.

Shelvey sat deeper and became part of the three man centre back team during the latter stages of the game.

Despite being a new role for the playmaker, this shouldn’t have surpassed too many Newcastle fans as Shelvey is a player that often drops deeper to receive the ball in a sort of quarterback like position.

Shelvey certainly has a few flaws as a player but if United are chasing a game like they were on Saturday at Anfield, dropping him deeper makes perfect sense to me.

His calmness on the ball and genuine ability to distribute it can be used and with him sitting deeper, he can get on the ball quicker and potentially have more time on the ball due to the fact that he is not surrounded by the hustle and bustle of the midfield.

Furthermore, it means that United can get some more legs into the midfield as they are trying to push to get something out of the game which was seen through Joe Willock’s introduction off the bench, with the 21-year old eventually netting the 95th minute leveller.

Speaking about the role given to his stand-in captain, Steve Bruce had this to say

“We just wanted him to stay deep or find a pass from deep to try to penetrate Liverpool.

“We know they are always going to play a high line.

“It was something we practised on Friday.

“We played him (in training) in a deep position to get turned around and find a decent pass. Thankfully it worked OK.”

It’s rare that Steve Bruce’s tactics warrant any sort of praise, but maybe he’s on to something with this one.