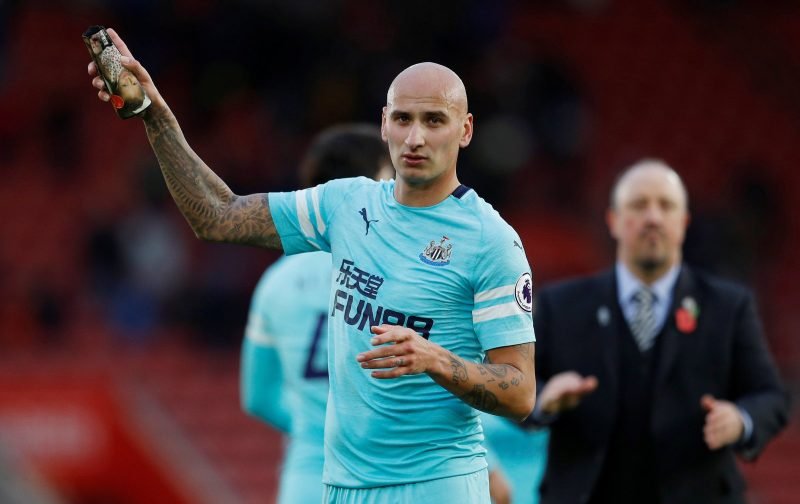 Over the next few weeks, it’s all going to be about ensuring that we aren’t relegated from the Premier League, but as soon as that objective is achieved, we need to start thinking ahead.

For that to happen, though, we need to have a productive summer, and not only does this mean signing players, but it also means letting some depart.

One man that seems to be facing an uncertain fate is Jonjo Shelvey, who over the last week has been linked with a move to West Ham by the Sun.

The Chronicle’s Lee Ryder has delivered his verdict on that matter this week, and it certainly seems as though there’s a chance that the Englishman could depart.

As per the Chronicle’s Q&A live blog (Wednesday, between 13:20 and 15:20), Ryder said: ‘I think if Shelvey isn’t starting every game when fully fit he is likely to press for a move. West Ham do like him and have the money to buy him too. If he isn’t a regular I can see him leaving next summer.’

At present, Shelvey isn’t a regular, and it’s tough to see that changing. He’s lacked fitness for much of the season, and the players that have replaced him – like Sean Longstaff – have excelled. There’s no reason to change that.

Barring a disaster, then, you’d expect rotation to be limited throughout the rest of the season, and so Shelvey isn’t likely to get many minutes. In that case, Ryder would expect a departure.

Of course, that could change, and he could force his way into Rafa Benitez’s plans with some strong performances in training. But so far, he hasn’t been able to do that.