“Greed before need”, “Toxic” – So many NUFC fans up in arms at club chief’s decision 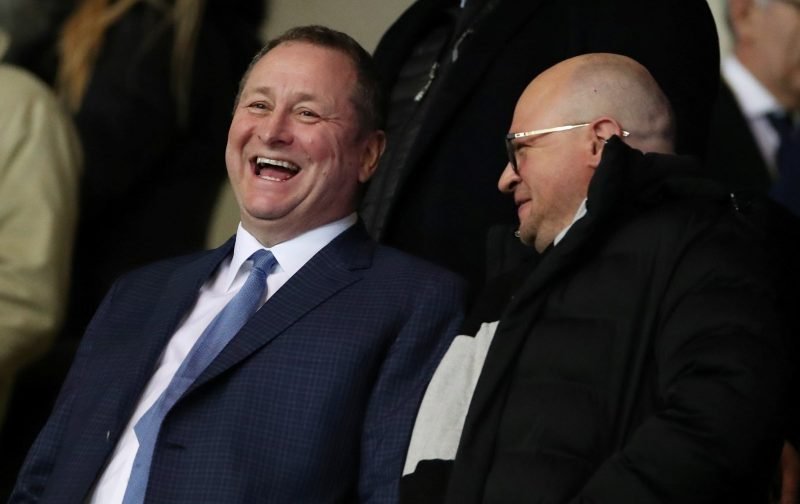 Many Newcastle United fans were left up in arms after Mike Ashley’s Frasers Group announced Sports Direct would remain open, despite Prime Minister Boris Johnson putting the UK on lockdown.

Frasers Group contacted all employees on Monday evening following the announcement that the UK would be introducing strict measures to tackle the spread of coronavirus.

People are now only allowed to leave their homes to exercise once a day, travel to and from work when working from home is not possible, to fulfil any medical or care needs and to shop for essential goods.

Shops selling non-essential items were told they must close, but Frasers Group declared themselves to be “uniquely well placed” to aid those aiming to work out from home due to their vast array of sporting goods and would be keeping their doors open.

Frasers Group’s decision sparked widespread fury on social media from politicians and leading public figures, with the Chair of the Labour Party Ian Lavery tweeting: “Who on earth does Mike Ashley think he is?

“He’s now prepared to endanger the life of his employees and the public at large. Selling sports wear is not a essential service. Take some responsibility SHUT UP SHOP.”

Who on earth does Mike Ashley think he is ????

He’s now prepared to endanger the life of his employees and the public at large.

Selling sports wear is not a essential service

Similar statements flocked social media with views of frustration, shock and those completely not surprised to see something like this come from one of Ashley’s companies.

The relentless backlash led to a dramatic U-turn by Frasers Group, who have since confirmed that stores will not be open to the public.

Totally agree, his only motivation is money! No regard for the safety of his staff or the greater community. The man is vile and needs to be brought to account. He is endangering life unnecessarily!!

If I worked there I just wouldn’t show up. This will surely be forced to close. Thankfully people are seeing Mike Ashley the way we see him. Although @rioferdy5 will probably do a home video declaring him a hero 😡 #NUFC #COVIDIDIOTS

Government should order MA to close all SD tat shops with immediate effect.

If he refuses then inform him SD wont be allowed any government loans/grants (apart from 80% wages). If he still refuses then arrest him.

Even in the worst of times he shows himself up for what he truly is.

Now is the opportunity to impact his cashflow. It’s the only thing that will get through his thick skin
People need to boycott everything Ashley
In 6 months time when Covid 19 starts to back off his only saleable asset will be NUFC
He may be forced to sell for cashflow reasons

Surely @MattHancock et al should be aware of this disgusting behaviour