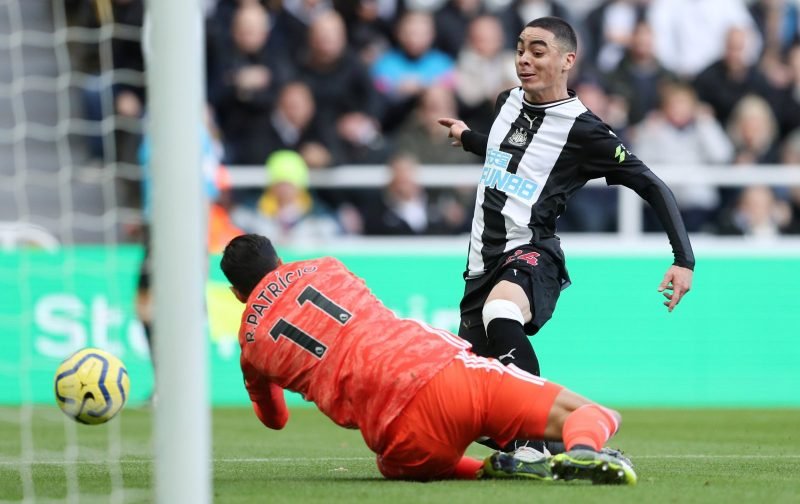 “This is what football is all about” – A lot of Newcastle United fans love the way Miguel Almiron repaid Lucas Rochford – the ball-boy who went viral with his reaction to Miguel Almiron’s missed chance against Wolves.

Miggy raced through on goal and fired a shot wide of the near post and ended up in the advertising hoardings.

However, ten-year-old Lucas was there to give the 25-year-old the thumbs up, and though Almiron didn’t notice, he made sure that Lucas was invited to the training ground.

There Almiron personally greeted Lucas and handed him a signed shirt and spent some time with the young Toon fan.

It is a sign of what a good person Almiron is.

Now we just need him to start producing the goods on the pitch.

A lot of Newcastle fans want him to succeed, and acts like this have only increased that feeling.

Ballboy Lucas Rochford warmed the hearts of thousands after giving Miguel Almirón a ???????? and ???????? after a missed chance in Sunday's @premierleague draw with @Wolves.

The ten-year-old from South Shields was invited to the training ground today so that Almirón could thank him. #NUFC pic.twitter.com/CMSsEjoBsE

As a lifetime #miguelalmiron fan regardless of his current struggles on the pitch I can assure you his smiles are genuine and reflect the feelings of his heart. He will turn things around.

The lads gets stick for not getting goals and assists which I understand should be a massive part of his game but he always Tries his best and his tracking back and his effort can’t be faulted keep your head up miggy pic.twitter.com/lL7saWhJOm

I don’t think, in 40+ years of supporting, I’ve ever wanted a player to succeed at Newcastle as much as I want Almiron to.

Many Newcastle fans want and believe that Almiron will come good.

This is absolutely brilliant.

If only the Club wasn’t still owned by you know who.#NUFC

Other Toon supporters thought that this act was brilliant from the 25-year-old.