Why Andy Carroll should start against Man City 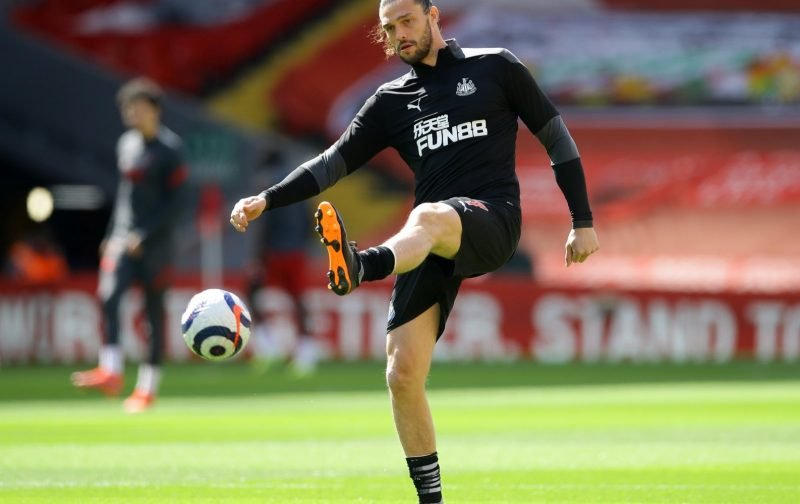 Newcastle United will be without their talismanic striker Callum Wilson when they welcome Manchester City to St. James’ Park tomorrow night.

Wilson showed his incredible finishing prowess by bagging a brace in the vital 4-2 win over Leicester City at the King Power Stadium last week but his cameo came at some cost, with the striker picking up a fresh hamstring injury that will keep him out for the rest of the season.

Quantity of options are not an issue for the Magpies, however there is a lack of quality when considering who should stand in for Wilson.

Steve Bruce has a decision to make but perhaps changing things up completely and opt for veteran forward Andy Carroll to lead the lines against the champions.

There are a few reasons why the former Liverpool man may just give the Citizens a bit more to think about than United’s other options.

Manchester City have built themselves a formidable defence this season and it has been a big reason for them going on to lift the Premier League trophy.

As such they are likely to be able to deal with Newcastle’s striking options.

Dwight Gayle and Joelinton may be more mobile than Carroll but they do not posses the technical abilities to really give the likes of Ruben Dias big problems. They have dealt with far better strikers on the way to their title win.

With Carroll on the other hand, Bruce has the option to play someone who offers something completely different. Whilst he is one dimensional and they would be under no illusion of what the Magpies would be trying to achieve.

Long balls forward would be the main plan of attack and with the presence he has up top he could attempt to bully the City defenders.

Furthermore with the new system United are operating in at present, they have more players on the pitch capable of high quality deliveries into the box and with Jacob Murphy and Matt Ritchie filling in at wing backs, there is more chance that the tall striker may get an opportunity to get his second goal for the club.

Of course, the likelihood is that the visitors would be able to deal with Carroll with ease but I feel he has more to offer to United’s unlikely chances of victory.

Fired up to win a new deal

Carroll’s time at St. James’ Park looks to come to an end with a whimper but this is his chance to ensure that does not happen.

With Dwight Gayle already handed a new deal despite limited contributions to the side, Carroll may well think that he has half a chance of still winning a new contract for the next season

If he can put in a performance to roll back the years then he can win himself a new deal but even if that isn’t on the cards, he will surely be intent on not letting his second spell on Tyneside end on such an underwhelming note.

Newcastle may be up against it against Manchester City but a strong performance from Andy Carroll would give something for Toon fans to get behind.