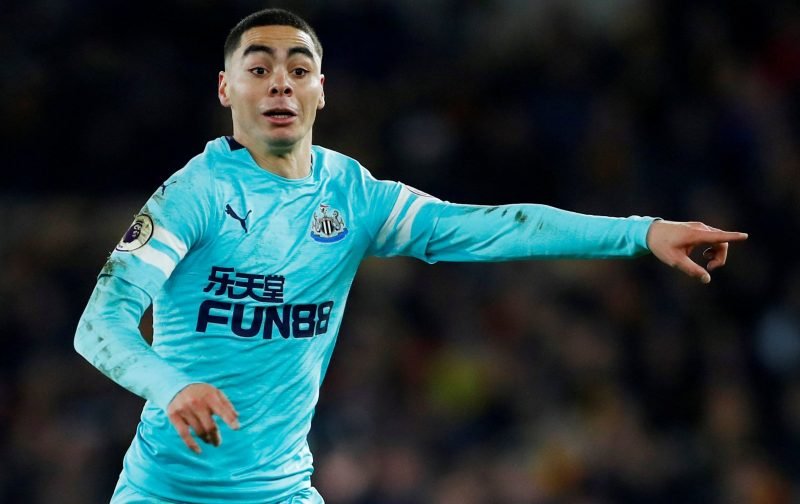 Miguel Almiron finally moved to Newcastle during the closing stages of the January transfer window, and it’s fair to say that we were delighted when the deal was done.

He, of course, moved to England with a rich pedigree owing to his time with Atlanta United in the MLS. How he was going to adjust to the Premier League, though, was anybody’s guess.

Fortunately, though, he’s enjoyed a brilliant start to the season, and that’s proven by a recent clip shared by the Chronicle on Twitter. They’ve revealed a host of stats regarding Almiron in comparison to his teammates. Indeed, Compared with a handful of his teammates, Almiron shines with regards to passing accuracy, shots per game, average key passes per game, through balls per game and average rating – which is a testament to his ability.

Miguel Almiron has already become one of #NUFC's most important players – and these stats prove it… pic.twitter.com/oUwdiG0QRi

This is evidence of how brilliant he’s been so far, despite only being at the club for a few weeks.

Of course, most Newcastle fans have been pleased with the impact that Almiron has had. He’s a relentless runner, he’s fantastic on the ball, and he’s always in the right positions.

However, to a point, those viewpoints are all somewhat subjective. What these stats do, however, is paint a real picture of the player that we’ve got – and it’s fair to say that we’ve got a pretty fantastic one.

Let’s hope that he continues to improve.