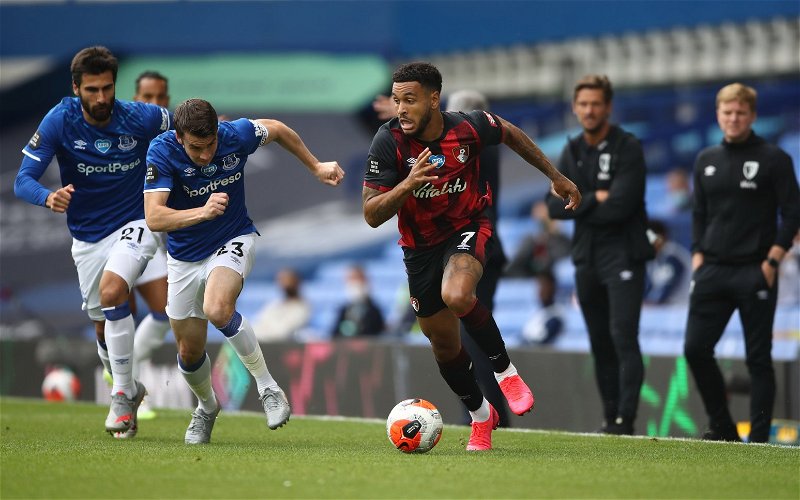 Everton have decided to release Josh King following the short time he spent with the club, meaning that he is available on a free transfer.

The former Bournemouth striker is a man that the Magpies have frequently been linked with over the past few years which makes you think he does have admirers at the club.

With that in mind, King being available on a free transfer is surely an avenue that the club are likely to go down.

Many of the deals that have been talked about have been with a transfer fee higher than £10M or involving the important Matt Ritchie going in the other direction so the bosman deal would be somewhat of a coup.

King had been a mainstay in the Cherries team following joining up with Eddie Howe’s team ahead of the club’s first ever season in the Premier League.

With a respectable return of 53 goals in 184 appearances for the South Coast outfit, King had seen his stock rise but due to his contract running out he was picked up on the cheap by the Toffees in the January transfer window just gone.

Without a goal in any of his 11 appearances for the Merseyside club, it is not a surprise that he finds himself looking for a new club.

There are a few reasons why this deal makes sense other than the aforementioned previous interest.

He would join a host of other ex-Bournemouth players at the club which could means he settles into the squad a bit easier. In particular, his history of partnering Callum Wilson could come in handy.

The cost-effective element should not be ignored as United will try to box smart in the window as a result of a low transfer budget.

Also, with Andy Carroll being released and Dwight Gayle’s contract situation still up in the air, Newcastle are in need of a backup striking option, a role that King could do very well.

Of course, we all want the club to be competing with Everton rather than picking up their rejects but in the place United are now in, this would present a solid bit of business.

With new claims about high takeover confidence from Mike Ashley, hopefully we will be looking the different end of the transfer spectrum but in the likely reality that there is not a quick answer given; King would be a good signing.