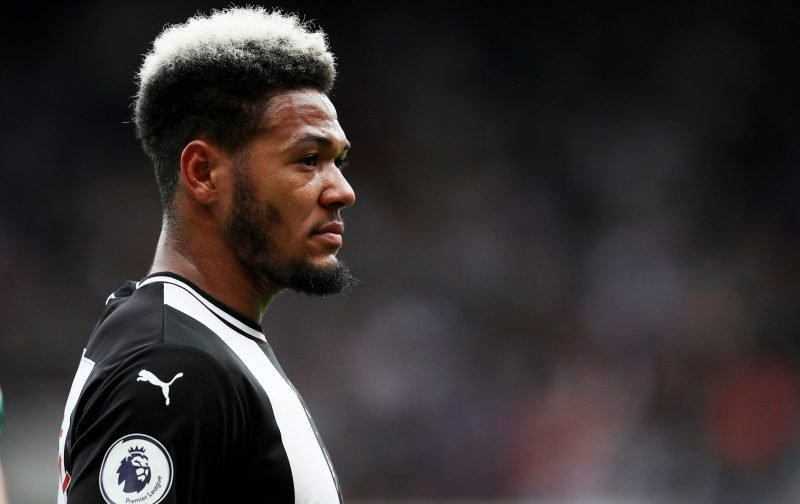 “You can see he is a quality player” – A lot of Newcastle United fans are talking about Joelinton and what they make of their record signing.

The 23-year-old was brought in from Hoffenheim for £40m and has gained a lot of praise form opposition managers including Jurgen Klopp.

The Brazilian is big muscular and also seems to have an excellent technique.

I have to say I like what I see, and even though he has only scored one goal, I am confident more will follow as soon as he starts getting service.

That is the main issue at the moment the lack of opportunities that he is currently getting because the Toon have barely had the ball in any of their games.

This weekend at home to Brighton is the perfect opportunity for our new striker to get his first goals at St James’ Park.

Jurgen Klopp has been extremely complimentary about Joelinton in the fallout from Saturday’s game. He feels the #NUFC man is made for the Premier League. Personally felt he showed flashes of quality. Are we confident he can score the goals needed to keep us afloat?

He’s been incredible, does so much for the team, gives it his all, a very smart player.

Thought he was awesome. Looks a real find.

Thought he played really well, but worry the goal scoring burden is completely on him. Think he’s a 10-12 a season man right now.

He’s still very raw, lots to learn but there is a player in there. The problem we will have is getting it out of him and seeing it. He just isn’t an out and out goal scorer.

You can see he’s a quality player, but he isn’t carrying anywhere near enough of the goal threat atm. He needs to either be playing last man, or put someone that wants to do that job in front of him, so he can freely drop off

Many Newcastle supporters are impressed by what they have seen from the new boy, but they want him to have more service.

Nope because he won’t get the service.

Other Toon fans are not so convinced and want to see more goal threat from the Brazilian.

Overall, Joelinton has started well for Newcastle, and he is holding the ball well for his team, allowing them to launch attacks.

The goals will come as soon as his teammates start finding him in good positions.