Reports coming out of London are suggesting that Tottenham are weighing up an approach for Newcastle’s talented winger, Allan Saint-Maximin.

An article on TeamTalk suggests that Spurs are resigned to losing Steven Bergwijn and Bryan Gil this summer and will look to Saint-Maximin to plug the gap, although it is believed that negotiations would have to start at £50m to even get Newcastle to the table.

Tottenham’s Managing Director of Football, Fabio Paritici is said to be a huge fan of the Frenchman, and although Spurs aren’t lacking in the forwards department, it is thought that someone with Saint-Maximin’s ability would add an extra dimension to the Tottenham attack.

Newcastle fans have already made it clear that they want Saint-Maximin to stay and prove himself at St James’ Park next season and the man himself has reiterated his desire to stay on Tyneside to be a part of the new project.

However, if Newcastle are to make the kind of moves in the transfer market that are being reported, some big names may have to move on to make room in the squad and to recoup some funds to keep within FFP. 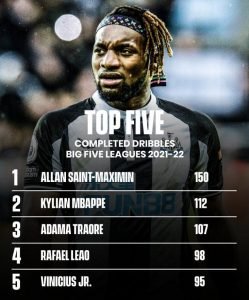 A graphic doing the rounds on twitter has outlined what Saint-Maximin is all about, absolutely blowing all competition out of the water when it comes to dribbling stats with 150 completed dribbles last season. Kylian Mbappe placed second on the list with 112. However, it is his end product that lets him down only amassing five goals and five assists at the end of those runs.

Saint-Maxmin has claimed that those numbers will shoot up when he has better players to aim for which is why most fans want to keep him around next season to see if he can live up to his word.