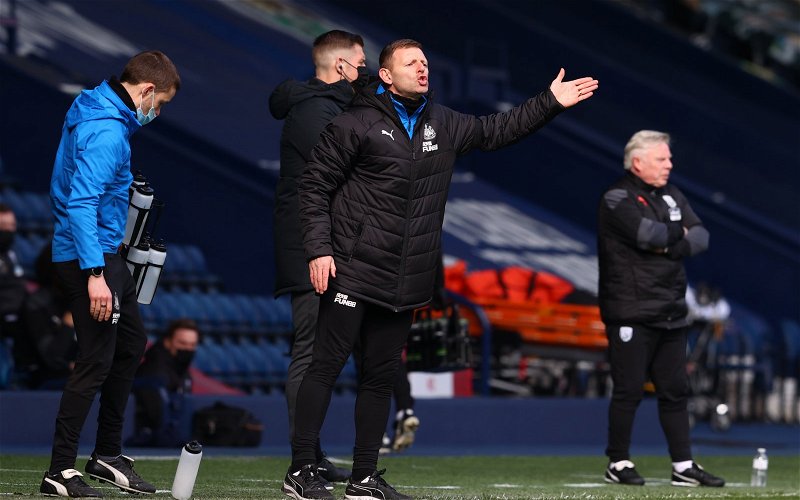 Newcastle United may not have any players that have made the cut for Gareth Southgate’s England squad but their assistant manager Graeme Jones has been given a call up by the former Middlesborough defender.

In the press conference that followed Southgate’s EURO 2020 provisional squad announcement, he announced that Jones would be joining the coaching staff for the upcoming tournament.

The pair have know each other for over a decade since doing their pro license coaching course together and the Three Lions manager is said to have wanted Jones as his number two in the past, an opportunity turned down by the Gateshead born coach due to his commitments to Everton at the time.

When speaking about the appointment, Southgate said the following:

“We are really pleased to be able to bring Graeme Jones in, who is obviously working with Newcastle at the moment. I have known Graeme quite a while, he’s got fantastic experiences of tournament football with Belgium and Roberto Martinez, great experiences as assistant manager and as a manager.”

Southgate also put on record his thanks to Lee Charnley and Steve Bruce by saying: “I need to thank Steve Bruce and Lee Charnley for their help in letting us work with Graeme, they have been incredibly supportive and I’m very appreciative of that.”

There a few reasons why this appointment could be a positive one for the Three Lions’ chances this summer.

Southgate touched on this point briefly in his interview but Jones has been there and seen it at the international tournament stage.

As part of the Belgium coaching staff that beat England twice in the 2018 World Cup in their route to an eventual third place finish, Jones has knowhow and experience that few other options have available and it could be very valuable to the young side.

He will be hoping to add to his collection of international medals but improve on his current 3rd place achievement.

How he has transformed Newcastle

Many Toon fans have noticed the marked improvement in the sides fortunes following his arrival from AFC Bournemouth.

Newcastle had been in serious trouble but Jones coming in has seemed to work perfectly. There have been positive noises coming from the playing staff about his abilities as a coach and the improvement is clear to see.

Prior to the appointment, the Magpies had played 20 league games and picked up a measly 19 points and scoring a pathetic 19 goals.

The stats are barely comparable over the last 18 games with United picking up a respectable 26 points and scoring 27 goals along the way.

Can Jones add a European Championship to his CV after successfully leading the Magpies to Premier League survival?