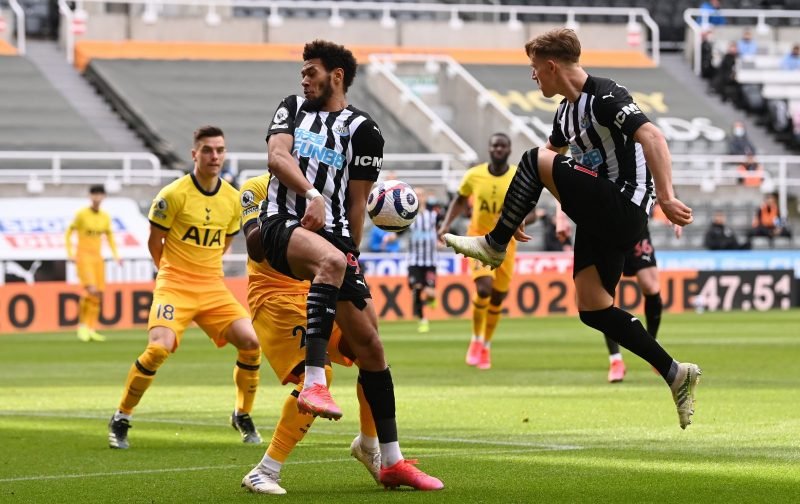 Matt Ritchie was a surprise inclusion in the starting 11 for Newcastle in their last outing against Tottenham Hotspur but the fight and commitment shown by the Scottish International was a welcome boost to United side that had been found wanting in those areas of late.

It was the first time Ritchie had found himself back in Steve Bruce’s starting side since the infamous training ground bust up between the pair where he labelled his Head Coach a ‘coward’.

Playing in the left wing back role, Ritchie had a part in both of his side’s goals and showed that he does still have the quality to be a valued asset at Premier League level.

He spoke to NUFC TV where he spoke about the draw with Spurs and also the challenge of the relegation dog fight. He was asked if Sunday’s game represented a step in the right direction, to which he replied:

“Yeah, I think so. I think it was a good performance.

“Obviously it was a change of system which suited us against a very good team. It was a good performance and hopefully a good point.”

I agree with Ritchie, we did play well for large parts of the game and had we not managed to salvage a late point, it would have been a travesty with some of the chances we failed to put away. It was certainly a big improvement.

Ritchie was an unused substitute in the humbling 3-0 defeat at Brighton and was well aware of just how different the two games were.

The 31-year old is determined to have a big say on how things go and many Toon fans, myself including, are hoping that he is a much more regularly featured component of the side from here on in too.

“I’ve been chomping at the bit to get back in, worked hard in training and luckily enough got back in the team and now I have to try and keep my shirt and perform. It’s the business end of the season now so performances need to be high and hopefully we can pick up points.”

Another quote from the ex-Bournemouth man is what we should expect from every game we go into.

“The bare minimum every week is to work hard, play with desire and a mentality to try and win the game. As we’ve found out if you don’t do that in the Premier League and you don’t have quality, you won’t get results.”

Say what you like about Matt Ritchie, but you can never ever criticise him of not putting in 100% each week and whilst this can’t be said for some players in the squad it is absolutely imperative that he keeps his place in the side.

He finished off by telling the interview about how the mood is good in the camp and this is a stark contrast from the reports coming out of the press following the Brighton game.

Of course, the vast majority want Steve Bruce out but the most important thing at the moment is a united camp and if they can all come together regardless of their thoughts of the Head Coach, I am convinced we will stay up. (Seems a fairly big if.)