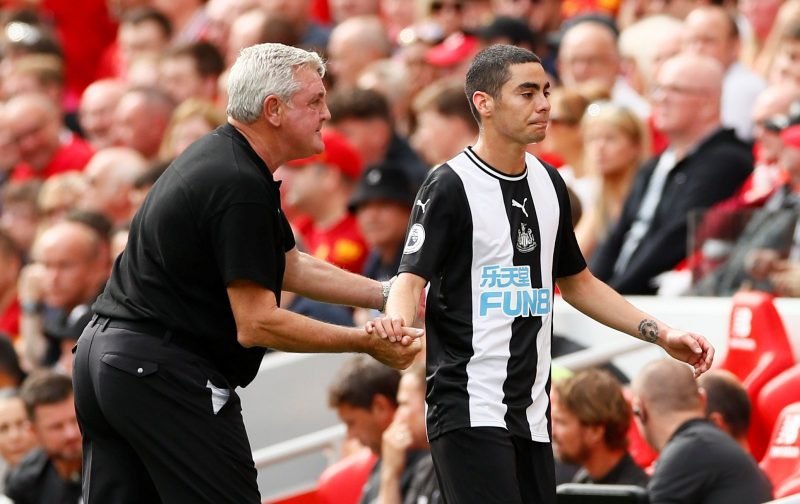 The excitement surrounding Miguel Almiron upon his then club-record arrival on Tyneside last January was seen as a momentous event for Newcastle, but now, things couldn’t be more different.

The Paraguayan international is yet to score or claim an assist in all competitions for the northeast side as numbers from Transfermarkt show despite coming close on multiple occasions, with Almiron last weekend yet again deserving of a goal when his effort was well saved by Matthew Ryan in a 0-0 draw against Brighton.

And as  numbers from Understat show, Almiron should be converting more as the former MLS star currently has the third-highest xG stat out of any player in the Newcastle squad, with Joelinton and Fabian Schar the only names outperforming the 25-year-old attacker.

There is no question that Almiron is massively underperforming under Steve Bruce, with the former Sheffield Wednesday manager playing the South American attacker completely out of position as positional figures from Transfermarkt show, and it seemingly appears that the only way for the Newcastle number 24 to thrive with the Magpies is for him to outlive the current regime.

Indeed, fans will no doubt remember the Almiron they saw under Rafa Benitez as reported by The Chronicle, a fast, exciting attacker who thrived on the counterattack and was, for a time, the creative and attacking heartbeat of the side. But then came Bruce, and it has been all downhill since then.

Fans have questioned Bruce ever since rumours began circulating that the 58-year-old manager was linked with taking over the hot-seat on Tyneside, and supporters have been stern over the former centre-back ever since his appointment as reported by The Guardian.

Almiron’s form has dipped massively since the appointment of the former Aston Villa boss, and with Newcastle failing to get results in the league with the Magpies winning just once so far, the Paraguayan’s future at the club seemingly hinges on the higher-ups in the organisation dismissing Bruce before he himself seeks a challenge away from St. James’ Park.