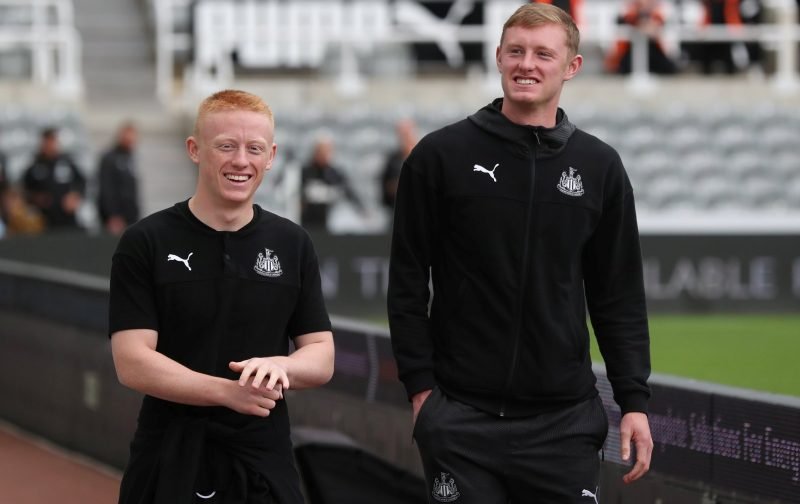 When the Newcastle United line-up was announced at half three on Sunday afternoon, there was one name that stood out – the inclusion of Matty Longstaff.

The 19-year-old younger brother of Sean was handed a Premier League debut over Ki Seung Yeung and Jono Shelvey.

It was a gamble by Steve Bruce, but it paid off as the two brothers dominated the midfield battle.

Fred, who cost £52m, and Scott McTominay had no answer to the Longstaff’s who snapped into tackles and made their presence known.

Matty also scored the winner with a crisp strike at the Gallowgate End.

The stuff dreams are made of, but it was not just Matty’s winner that was impressive.

He looked as if he had played in the Premier League his whole career, not making his debut.

The 19-year-old was spraying passes all over the pitch and looked so composed.

He was the perfect foil for brother Sean, who finally turned in a display that was similar to what he produced last season.

Commanding in the tackle and composed on the ball, Sean was brilliant in the midfield.

Two passes, in particular, were very much like Michael Carrick.

One in the first half to free Miguel Almiron – a beautiful chipped pass that caught Manchester United’s backline out and a second to release DeAndre Yedlin in stoppage time and relieve pressure off his team.

This may only be one game, but the two Longstaff’s in the midfield were superb, and with Isaac Hayden banned for a further two games, Matty will be given the chance to stake a claim for a regular spot alongside his brother in the Newcastle engine room.

If he turns in two similar performances, then do not be surprised to see Hayden have to settle with a place on the bench. The Longstaff’s could be Newcastle’s number one midfield pair.