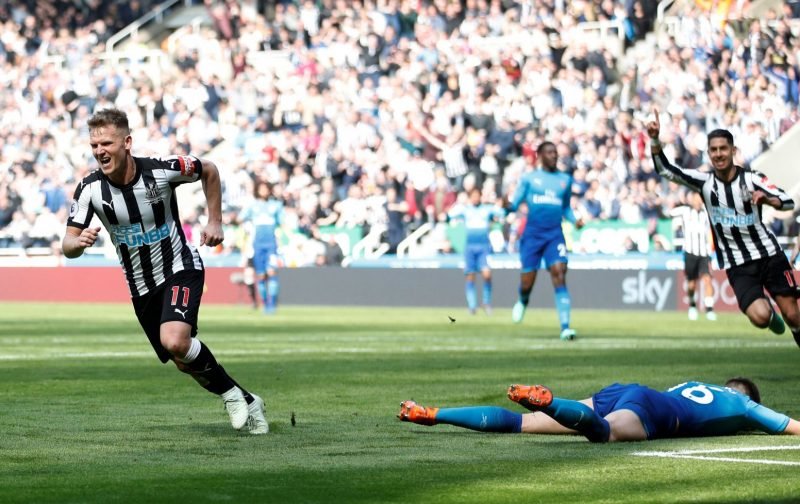 Depending on how you viewed this weekend’s game between Newcastle and Arsenal, no matter how the game was broadcast to you, you can’t get away from the facts.

That fact being that Newcastle beat Arsenal 2-1 and barring probably the biggest miracle of all time, guaranteeing that top-flight football will be on offer in the North East again next season.

The day had a strange feeling about it and reminded me of the game against Spurs when we beat them 5-1 when we last got relegated two seasons ago, if not for the light blue strips that Arsenal wore away from their normal red and white efforts but more because the pressure felt off.

Regardless of any media-driven ideology about the fans being nervy, this was simply not the case as the whole of the stadium showed how to support a football club properly although this very rarely comes across audibly via the filtered or muted tv microphones and yesterday was no different.  Going home with a ringing in your ears due to the din, only to get the propaganda version of things being aired on the box.

As things transpired, we started well enough I thought with Jonjo Shelvey finding the well-timed runs of Dwight Gayle like Exocet missiles on a number of occasions. It seemed a matter of time before one of these came off although Arsenal looked threatening themselves without really troubling our keeper and when they scored first before the quarter hour mark, there still seemed no panic as if we knew we’d come back at them. The goal which looked offside to me at the time was proven when I saw it played back at home to be onside and it was a decent strike that saw the gunners go a goal up. 0-1.

The crowd cranked it up a notch and we went again, sticking to our game plan before getting the equaliser some fifteen minutes later.  Just before this point, I thought Kenedy had been quite quiet and this was confirmed to me by Rafa Benitez switching wings between him and Matt Ritchie. This may have played a part in our goal as a couple of Arsenal players seemed out of position and this may have been caused by their confusion as to why their men (Kenedy and Ritchie) were in different areas of the pitch.

As it happens, Shelvey launched one of his missiles from the halfway line, Gayle timed his run perfectly by latching onto it, laid it off to the advancing Deandre Yedlin on the right of the box before he powered in a low cross into the direction of Ayoze Perez.  Diverting the ball towards goal in the blink of an eye, it continued the Spaniard’s recent goal glut. 1-1.

In the second half, the game was pretty even although Arsenal seemed more intent on passing and moving which they did at ease but the sense was always there that we wanted the ball more as our fight intensified.  The referee, Anthony Taylor, though blowing up for the slightest of contact time after time and Arsenal’s players seeming to go to ground more easily as time went on.

My view here was that the ref from Manchester probably had a grudge against us beating Man Utd 5-0 back in ‘The Entertainer’s’ days but without knowing for certain whether he’s a red or a blue, this was more in jest. This all came to a head though when the crowd had enough of one biased decision too many and the din seemed to make him think twice about blowing for decisions after that.

With things seemingly headed to go one way or the other, Islam Slimani was brought on and it changed the game. He brought a greater buzz to the crowd with his effort, skill and movement. He just seemed a couple of levels above the strikers we have and maybe what we have been missing and it was no surprise when he was involved in the winner.

A ball forward by us was half cleared and then headed back towards one of their defenders besides the wing before Slimani intercepted with an excellent assisted header towards Perez, he either feined or played a deft touch into the path of Ritchie who was clear in the box. He dinked it over the advancing Petr Cech before heading off to destruct the corner flag with his goal winning celebration. 2-1.

The final 20 odd minutes played out with a Kenedy deflected shot hitting the bar and both sides going quite close without really bothering either goalkeeper but the initial thoughts were that there was no real danger in anything but a home win regardless as to how the TV ‘experts’ put their spin on things.

Far too much emphasis was put on how Arsenal lost this rather than how we won it as it was well deserved.  Man of the match, which for once came across in the highlights, was Mo Diame.