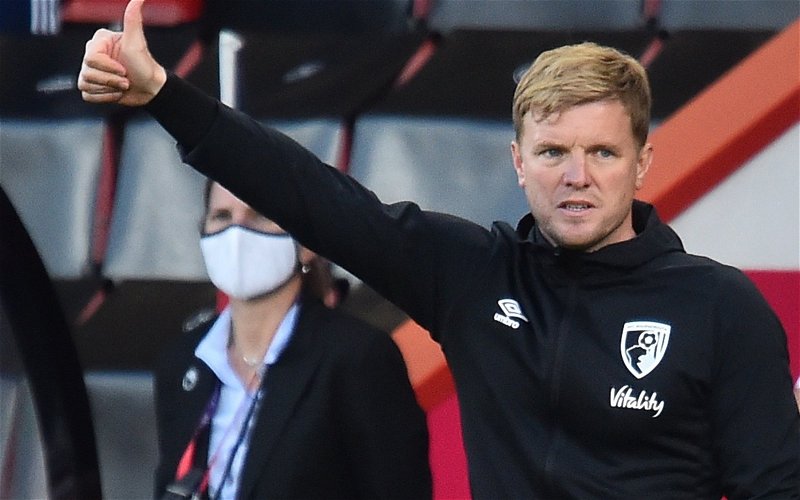 Eddie Howe had previously been linked to taking the managers position at St. James’ Park, but it seems as if the former Bournemouth man’s next job in management will not be on Tyneside.

For many Toon fans including myself, Howe seemed not only a smart option to replace Steve Bruce but also a realistic one but it is Celtic that look set to appoint the 43-year old.

For such a young manager, Howe’s achievements in the game are fantastic and leading the Cherries to the Premier League is one of the great footballing stories considering the predicament that the South coast club had found themselves in when he first was appointed manager.

His impressive track record along with his positive style of play are the main two catalysts behind why he was such a popular choice amongst Newcastle fans. He also has previously worked with a fair few of our first team players at Bournemouth, which may have helped him in his role.

Had the hierarchy pulled the trigger on Steve Bruce, maybe Howe would have found himself in the dugout at St. James’ Park but unfortunately we will never know.

According to BBC Sport, Celtic intend to finalise the appointment of their next manager shortly and they expect that man to be Eddie Howe. He will take a vacant role following the sacking of Neil Lennon in February and John Kennedy’s temporary role coming to an end.

Meanwhile, we are stuck with Steve Bruce and whilst performances improved towards the back end of the season, ultimately leading to Newcastle staying in the division, he is not a popular man, which was best shown by him being booed by fans during the lap of honour after the 1-0 win over the Premier League’s basement club Sheffield United.

The only way that we get rid of Bruce this summer, is if the takeover deal is finally passed through.