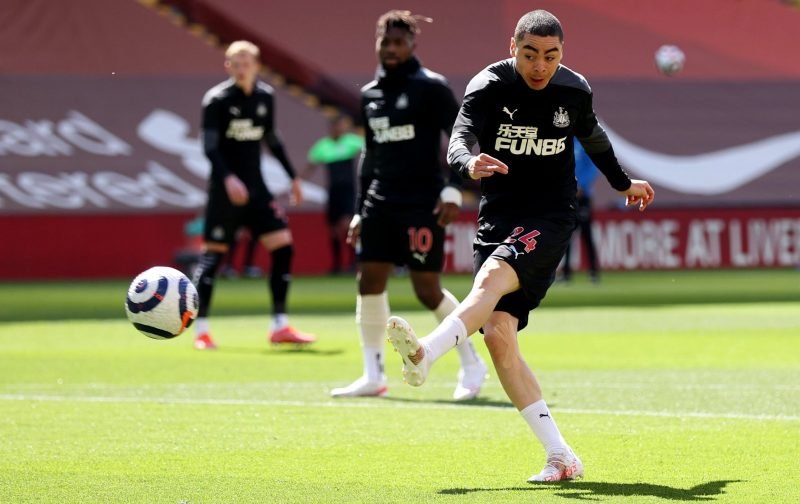 Comments made by Toon ace Miguel Almiron to a Paraguayan radio station had many Newcastle fans worried about the prospect of the 27-year old leaving Tyneside.

The man himself has come out and reassured supporters that his quotes have been somewhat lost in translation and he is in fact more than happy to stay at Newcastle United for the foreseeable future.

The comments in question where Almiron saying that he wanted to play for a side that ‘fights more’. This came after the humbling 3-0 defeat at Brighton and Hove Albion where it’s fair to see there was a distinct lack of fight amongst the Magpies players.

Since that horror show at the Amex, the same can not be said and United have come together and won some valuable points that looks like keeping them up in the Premier League this season.

Speaking to Sky Sports, Miggy has clarified what he said:

“What I was speaking about has been wrongly interpreted.

“At no point was I suggesting I wanted to play for another team.“As I’ve been saying, I’m very happy in Newcastle and all I’m thinking about is helping the team achieve its goals of improving.”

“In the short term, the focus is fully on keeping Newcastle in the Premier League and finishing the season well.”

He concluded his thoughts on the matter by adding: “We want to reach as high as we can in the league and right now, I’m not looking too far beyond this.”

It is great to hear Almiron publicly state that he is happy at the club and it goes some way to put to bed the stories of unrest and his agent talking up a move for him.

Almiron has been a victim of the new formation as it has meant he can not get up the pitch as frequently as he would like but nonetheless the Paraguayan has proven himself to be a key player for the side and it is imperative the club keeps ahold of him.