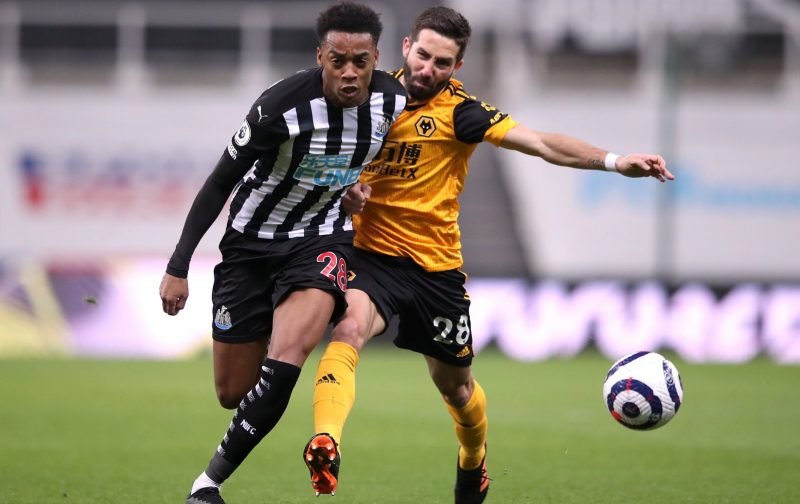 Joe Willock was on hand to score a late equaliser for Newcastle United against Tottenham Hotspur and according to reports he could be available to purchase on a permanent deal this summer.

The Sunday Mirror reports that Willock could well be made available for a permanent transfer in the summer with the Gunners keen to cash in on their young midfielder.

However according to the Chronicle, United would rather take the 21-year old on a season long loan instead of stumping up the cash.

This is hardly surprising as even in a Covid-19 affected market, a young English midfielder with the CV that Willock posses would surely cost north of £20M and we weren’t particularly keen on parting with big sums of money for players before the pandemic let alone after it.

Of course, then there’s the very real possibility of relegation to the Championship. Despite the well earned point against Jose Mourinho’s Spurs, United did spend part of Sunday in the bottom three before Aston Villa came from a goal behind to claim all three points against Fulham.

Relegation would most likely we were not even able to get the youngster back on another loan move with Arsenal presumably wanting top flight action for their young star.

I feel that Willock has definitely improved our central midfield options. He is fast and more dynamic than our other options and tries to carry the ball more often.

The statistic that shows just how different Willock is, is that he has completed nearly double the amount of dribbles per game as our currently fit mostly used midfielder Jonjo Shelvey as well as picking up more goals and assists than any of the other midfield options in less games than most.

The eagerness to get into the box is something that he has in abundance and as show by his two strikes for the club so far, he has a useful knack of knowing exactly where to be in the box.

He will be a very useful asset to us in our fight against relegation and if we can get him back involved next term, that would only be a positive thing.