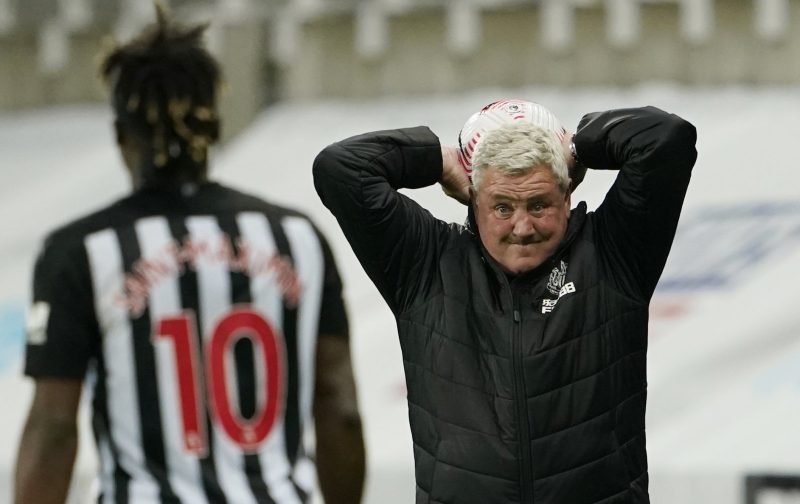 Steve Bruce’s search for balance when it comes to Newcastle United has to be a two-way street.

While, personally, I find it hard to fathom how on earth he is the club’s manager in 2020, some of the criticism at times has been too much and, ultimately, the man who employs him is the problem. Mike Ashley is the reason Bruce is in charge of Newcastle. No one else.

Still, Bruce is quite clearly out of his depth.

No, this isn’t a knee-jerk reaction to the 4-1 loss to Manchester United on Saturday night. As some of the stats from last season show, there doesn’t appear to be much of an attacking plan under his watch, with the Magpies amongst the lowest for xG, possession and shots.

Had VAR not given a controversial penalty against Tottenham in the dying embers of one of the worst Newcastle Premier League performances in recent memory, it’d have been an even more miserable start to a campaign where the Toon have been battered by Brighton, Spurs (in terms of performance) and United.

Bruce has given us some good moments but these have been fleeting (smash and grab wins against United, Spurs and Chelsea) and the prospect of wasting a talented frontline by continually leaving out Miguel Almiron and Ryan Fraser is a concerning one.

Thing I can’t shake about Newcastle: they should be so much fun. A couple of decent defenders sitting behind a group of talented, slightly reckless ball players and carriers. And yet it’s… this.

After all, these are talented ball carriers capable of getting the team up the pitch quickly and Fraser in particular has proven to be a capable creator at this level, so the reluctance to use them and attack seems like a major waste.

So, Bruce is right, there should be balance. He should be praised for doing a good job (albeit relying on good luck) last season in difficult circumstances but, now, he should admit things aren’t going well and there appears to be no plan on how to improve this team.

For that reason, he should be sacked.