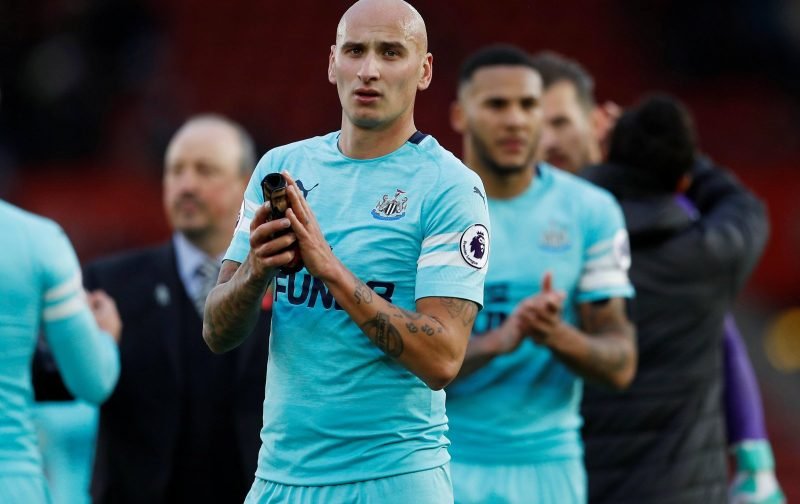 Some Newcastle supporters have been reacting on social media to recent comments made by Jonjo Shelvey, amid speculated interest in his services.

The 27-year-old is thought to once again be a target for West Ham United, who had attempted to lure the former England international to East London in the winter, only to be refused by Rafa Benitez.

At the time, Shelvey was very much considered as the Spaniard’s fifth-choice central midfielder, and remained an outcast of the starting XI until he was gifted a return against Brighton & Hove Albion while wearing the captain’s armband.

Regardless, it has been suggested the Irons have been weighing up a move for the Romford-born midfielder, and may offer us as much as £20million. However, they have also been linked with a move for Isaac Hayden while he searches for a move down south, but will only sign one of the two.

If Manuel Pellegrini’s side opt for the Arsenal product over Shelvey, that should not be an issue on Tyneside, as the Charlton product – who spent three years at Liverpool – has shared his desires to fight for a regular place in the United first-team again.

“Last season wasn’t the best for me,” Shelvey told the club’s official website. “The truth is, I got a very, very bad injury, and I’m not looking for excuses, but that is the reason I was out [of the team].

“I took a number of injections to try and get me [in a state] to play games, but it just wasn’t to be.

“People will write you off. But as far as I’m aware, I’m a Newcastle United player, and until I’m told otherwise I’ll keep fighting for a spot in this team and to show everyone how good I am.”

When his claim was then shared on Twitter, here’s how these Newcastle supporters reacted…

Very difficult to get in the team in front of Kroos but fair play to him.

Best overall player in our squad, when fit and ticking.

Love this bloke for just thinking with this attitude, fair play mate

3 words for him: Increase work rate!

I’m backing Jonjo, back to full fitness he’s a match winner with his precision passing, and unrivalled committment.