‘Give the lad a chance’, ‘Get him sold’ – These Newcastle fans are split on 27 y/o forward 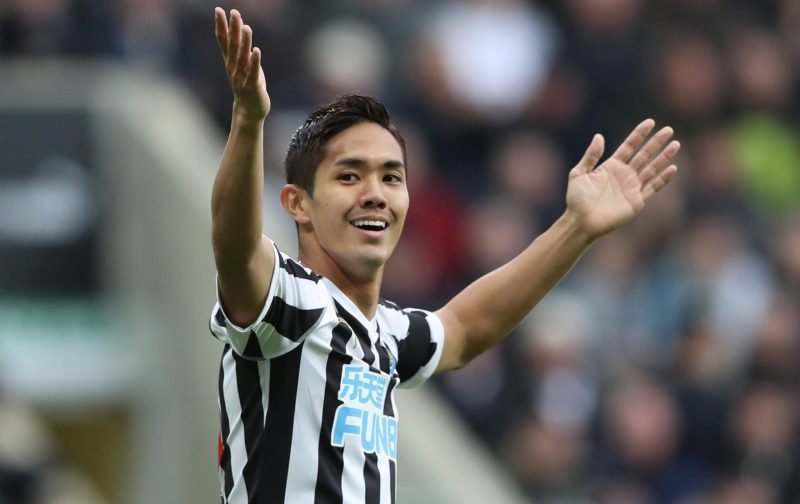 Yoshinori Muto has divided opinion amongst the Newcastle fanbase after the club sent him birthday wishes on Twitter.

Their official page tweeted: “Happy 27th birthday, @yoshimuto18.” Some supporters believe the player should be sold whilst others want to see him in the team next season.

While playing for the Bundesliga side he scored 23 goals and provided 11 assists in 72 matches. In contrast, he managed just one goal in his 17 Premier League games last season.

Whoever takes over at St James’ Park will find the options in the striking department are limited. After selling Ayoze Perez, refusing to activate Salomon Rondon’s release clause and Joselu’s departure, Muto and Dwight Gayle are the only recognised senior attackers left in the squad.

Despite his lack of goals in a black and white shirt, some fans want the forward to be given more opportunities, yet other supporters believe he is not good enough.

Some took to Twitter to share their views on the player, one stated ‘give the lad a chance this season’ whilst another felt at 27, he has ‘no sell on value, get him sold now while there’s still a chance to breakeven.’

Give the lad a chance this season whoever is in charge. Not that we have much choice anyway!

27? He’s far too old for a Mike Ashley team! No sell on value, get him sold now while there’s still a chance to breakeven.

He is getting on a bit… should be sold?

Gayle and Muto up top this season ????

Get him started and give him a proper chance to prove himself.

Scored a great goal against MU last year. More of the same next season please? Not sure where else the goals are gonna come from