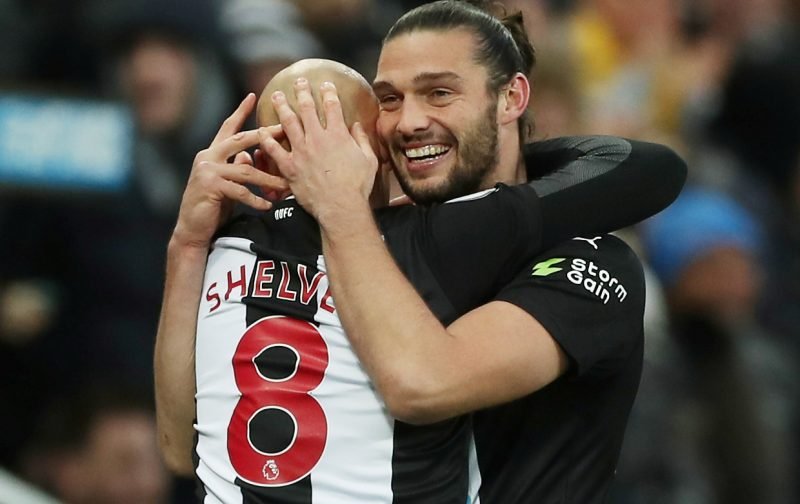 Lots of Newcastle United fans have been reacting on social media to reports by the Chronicle, claiming Andy Carroll will be fit for action when the Premier League season eventually resumes.

Head coach Steve Bruce has been without the 31-year-old since January’s FA Cup Third Round Replay with Rochdale AFC, having sustained a hip flexor injury in the lead up to hosting Chelsea.

Carroll later suffered yet another setback in his rehabilitation during February when he went down injured after attempting to volley a ball in training, and has missed our last nine games in all competitions as a result.

The wait to see the Gateshead-born target man back on the field may not have lasted much longer had the season not been postponed due to the coronavirus pandemic, as Bruce has revealed to the Chronicle that Carroll had returned to first-team training.

“Carroll had been back on the training field,” the boss said. “We had him joining in for the last couple of days [in preparation for the planned Sheffield United match].

“So he is in and around it again.”

Having Carroll back on hand when the season resumes will come as a boost for Bruce, as while the striker is yet to score in any of his 14 outings across all competitions this term, only Christian Atsu (five) has registered more assists than the 31-year-old’s four.

Here are some of the messages shared as fans reacted to the Chronicle’s report, citing Bruce’s comments on Carroll’s return to fitness…

On a positive note, if thebFA Cup does get played, we should have Martin Dubravka and Andy Carroll back fit. It really could be our year. #nufc https://t.co/3ljYVFtOeh

Bold of you to assume he’ll be fit in 2025 pic.twitter.com/0QQI1kwfOi

Could be pointless, season might be cancelled and he’s out of contract… https://t.co/EVNIkUl9lq

Hilarious that he should return when there is zero prospect of any competitive football. Still get injured for sure!

Will get injured playing keepy upy with a bog roll 🧻

He will be injured again by the time the season restarts in 3 years’ time.

In other Newcastle United news, the club have been backed to reject the chance to sign a €10m man this summer.