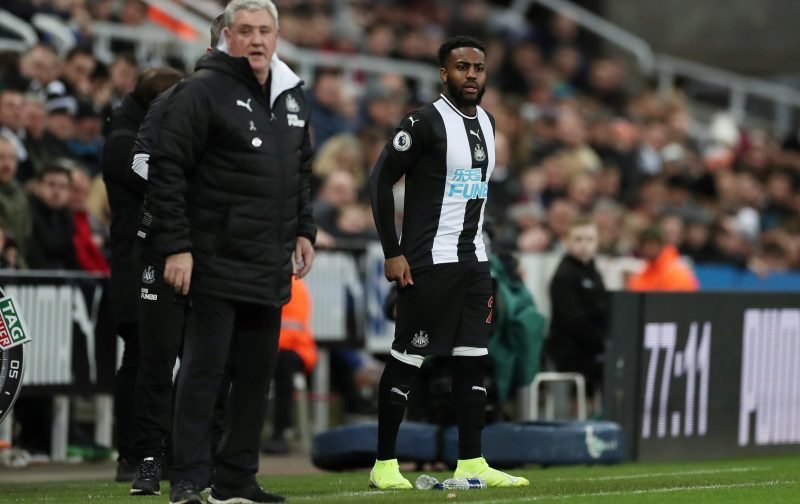 Lots of Newcastle United fans are firmly opposed to the club signing Danny Rose on a permanent deal, after the boss told the Chronicle that he is keen to keep the Tottenham Hotspur defender at St. James’ Park.

Rose moved to Tyneside in the January window on loan following Jetro Willems’ season-ending cruciate ligament injury, and Bruce has since called on the 29-cap England international to start five of the six games to have been available to him.

The 29-year-old failed to paint a positive picture of himself during our most recent Premier League fixtures, with Rose only showing rare flashes of skill against Southampton and looking unfit at home to Burnley.

His fitness levels have left many supporters clear in their view that Rose would not make for a suitable permanent signing in the next transfer window, though Bruce will recommend to the board that a deal is struck.

“He is an established quality player,” the boss said. “We managed to get him through the door and he will be great for the next three months. And hopefully longer after that.

Tottenham are expected to lower their £20million valuation of Rose in the summer as he will only have a year remaining on his £60,000-per-week contract, though Spurs would owe 10% of any fee to Leeds United as the West Yorkshire side are entitled to a sell-on bonus.

Many Newcastle fans have responded to Bruce’s plans to recommend signing Rose permanently by standing firmly against the potential deal, at least unless the Tottenham fullback is brought to St. James’ Park alongside Eintracht Frankfurt’s Willems.

If this is true Steve needs to be tested for coronablindness. Rose isn’t half the player he was — will be another owen, Smith, Colback, Saivet etc just filling a squad number and picking up wages. For what they will pay him we could sign both Longstaffs and still have money left

Nope! Willems all day, every day. Rose isn’t the player he once was #NUFC

He’d be my 4th choice at LB this season, Willems, Dummett and Ritchie all better in that position. Wouldn’t take him on a free.

Been poor, on paper looked like he was a good signing

Thought he was a good signing but off the form he’s shown so far he hasn’t earns himself a transfer and there must be better value for money elsewhere. Slow, doesn’t get close enough to his man and surprisingly can’t pass.