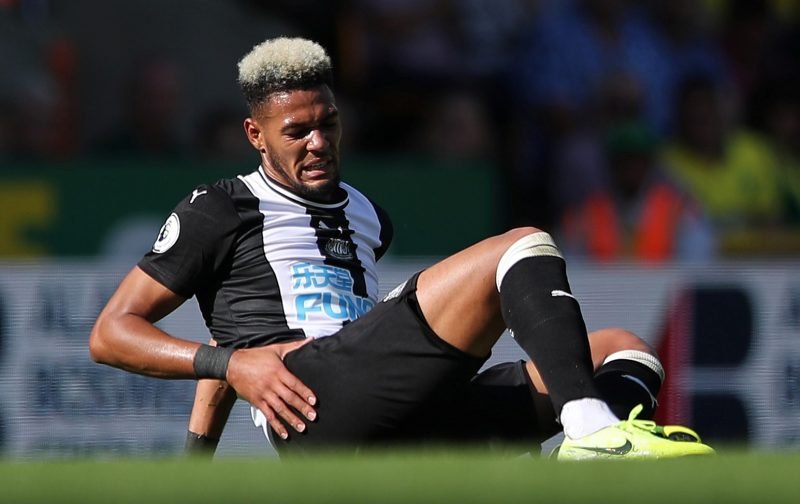 Newcastle United striker Joelinton is expected to be fit to face Tottenham Hotspur on Sunday, according to The Telegraph.

The Magpies’ record signing was withdrawn midway through the second half of our disheartening defeat against Norwich City with an expected hip injury, but scans taken at the start of the week revealed no significant damage.

Toon boss Steve Bruce is understood to be more concerned over how the Brazilian’s performance against the Canaries affected his confidence, having missed a relatively comfortable chance to open his Premier League account with a header while the score was still nil-nil.

The boss’ concerns have been echoed by some of the St James’ Park faithful, too, with supporters suggesting Joelinton ‘couldn’t hack it’ against Grant Hanley and Ben Godfrey, while others felt the 23-year-old just ‘didn’t fancy’ the challenge posed by the reigning Championship holders.

Those fans may have a point, as The Telegraph note that United’s coaching staff are trying to lift Joelinton’s spirits ahead of the trip to North London at the weekend, as they are concerned that the team’s early-season form may discourage the former TSG Hoffenheim star.

One route Bruce and his team are considering as an option to turn around the poor start to the campaign is through the former Sheffield Wednesday boss’ favoured 3-5-2 system, with the Magpies working on defensive shape ahead of the Spurs test.

A move to a flat back four could be inbound after Bruce utilised the shape throughout his tenure at Hillsborough and with Aston Villa – last turning to a three centre-back line-up regularly while in charge of Hull City when they were relegated from the top-flight.

It’s very worrying that there was clearly nowt wrong with him, he may be a care bear! We need AC to get back and show him how it’s done in the PL

Not trying to slag the lad off but a blind man and his dog could see that he just didn’t fancy it on Saturday, especially in the second half.

He was blowing hot air after 60 mins and Hanley and co had battered him all over.

Couldn’t hack it and wanted off

If the formation and players within that formation are right then perhaps it could be good news. But if he is left on his own up front then it will be Norwich all over again.

At least we’ll get beaten with our expensive striker on the pitch!

He needs to keep his eyes on the pitch and not the nightlife …. heard he’s a regular about and about already don’t need a repeat of dyer bramble etc