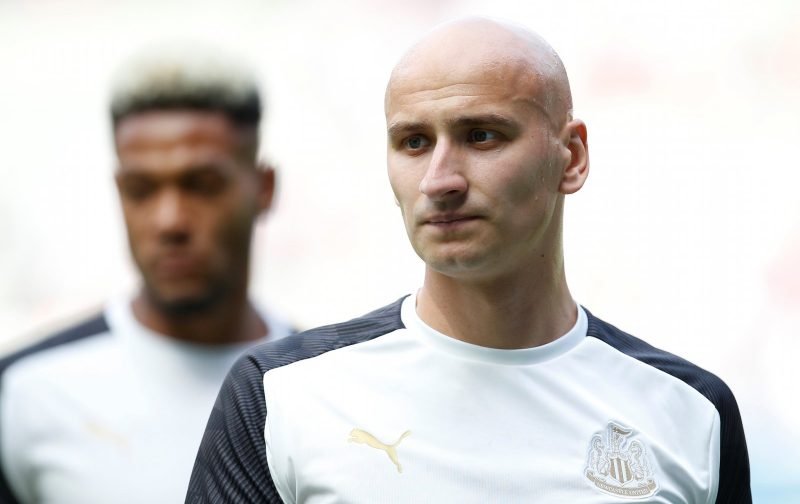 Newcastle boss Steve Bruce has been handed a welcome boost ahead of the Magpies’ trip to Norwich City, as Jonjo Shelvey is back in training with the first-team, according to the Chronicle.

The former England international is understood to have taken up a normal role in training on Wednesday, and was joined by Rolando Aarons, Jack Colback, Achraf Lazaar and Henri Saivet as they look to maintain their fitness despite being omitted from our Premier League squad list.

Shelvey was forced off just before the hour mark during our opening day defeat to Arsenal, and his departure sparked a change of fortunes for the worse, with the Gunners able to secure a foothold on proceedings that proved irreversible.

Before his enforced substitution, United were able to hold the visitors out and apply pressure on Unai Emery’s North London side, but a midfield partnership of Isaac Hayden and Matt Ritchie, in behind Miguel Almiron, failed to carry anywhere near the same structure.

Having to take on newly-promoted Norwich with a similar line-up could have given the Canaries confidence in clinching their first points of the season, but having £13.5million-rated Shelvey back in the line-up should give Bruce the advantage.

The former Sheffield Wednesday head coach clearly wants to proceed with a midfield trio ahead of a three-man defence, with Almiron operating alongside club-record signing Joelinton in attack.

Almiron faired reasonably well in the more advanced role, too, while it appears to be too early for Allan Saint-Maximin to be a starting member of the squad as he adjusts to life in the Premier League.