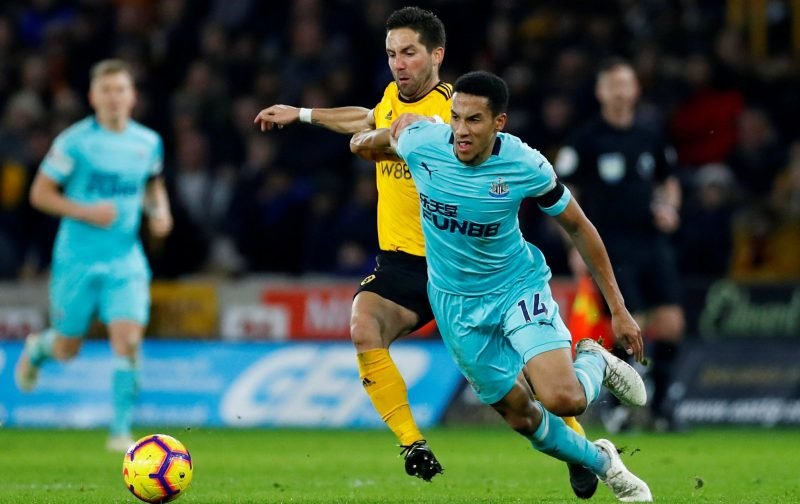 Isaac Hayden may be desperate to leave St James’ Park in the summer, but the want-away midfielder has stated that the dressing room are crying out for quality additions to help take the Magpies to a higher level, as per quotes by the Chronicle.

The holding midfielder has insisted that the first-team are intent on pushing on up the table going forward, and that club chiefs must impress the players as well as the boss with worthwhile purchases in the upcoming window, and not settle for another season where we only secure our Premier League survival.

And yet, the 24-year-old is eager to follow the soon-to-be out-of-contract Mohamed Diame out of the exit door, having seen a summer move blocked by Rafa Benitez a year ago.

Like last summer, Hayden is keen to leave the North East and return to the South West of the country to be closer to his and his partner’s families, given his daughter still requires regular medical attention following her premature birth.

The Arsenal product, from whom we bought Hayden from in 2016, has also insisted that there are ‘no excuses’ in the board blocking his exit this year, and that our trip to Fulham on Sunday is hopefully his last in Black and White.

“I’m pretty sure this will be my last game at home,” he said, following our defeat to Liverpool at the weekend. “In football, you never know, so I can’t say for definite, although it’s looking like my last game here.

“Nothing has changed [from a personal perspective]. It’s not what is best for me or my family to be playing here next season and to be doing the travelling I have done this season.

“It’s unfortunate but the club know my stance, and have known it for a year now. There are no excuses going into the summer. It’s about getting the deal right for the club and for myself.”

Should we sell the former England U21 international as he would like, the Telegraph understand club chiefs will reject any offer below £15million, and could hold out for near £20m for someone we paid just £2.6m for three years ago.

That money could then go toward signing the high-quality additions Hayden claims our ‘frustrated’ dressing room are crying out for.

“It’s a frustrated dressing room. If you ask any player in that dressing room, every single one of them wants to improve,” he said. “There is no one in there who wants to shy away and does not want better players arriving. The only way you get better is by bringing in better players.

“It’s very important [that Benitez is also retained]. But it doesn’t matter what players say, no one can influence that but the hierarchy of the club, it’s up to them to come up with a package that the manager is happy with.