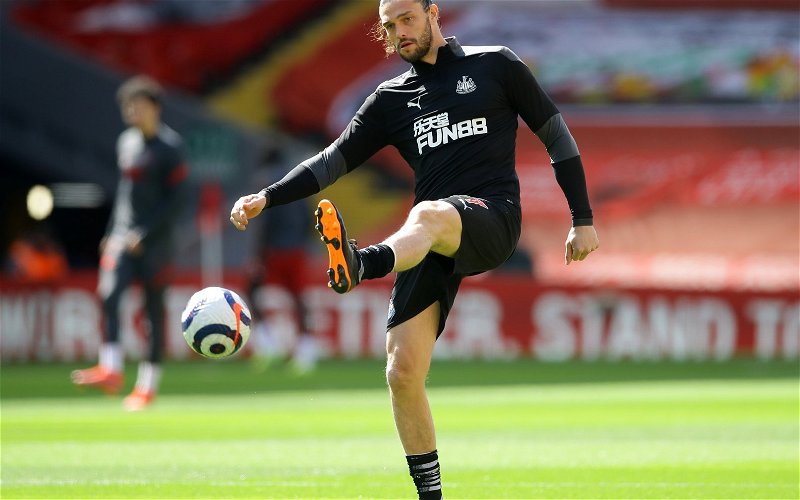 Andy Carroll’s second spell at St. James’ Park appears to have come to an end with the 32-year being released at the end of his current deal that is due to expire at the end of this month.

The news was broken via the Premier League’s official website as they posted a list of all players being released by their respective clubs.

The signing of the target man in the summer 2019 was met with huge optimism as many fans reminisced about the Andy Carroll of old prior to him ruining his career by jumping ship to play second fiddle to Luis Suarez at Anfield.

It’s easy to see why there was such happiness over the deal, Carroll was brilliant in his previous spell and he was always a handful which is why the overwhelming majority were able to overlook the obvious flaws that came with the forward’s homecoming.

Unfortunately, his second spell at the club was somewhat of a damp squib with a consolation goal against Leicester City in front of an empty St. James’ Park being the only time that he found the net for the Magpies.

He found game time extremely hard to come by and this is perhaps the reason for why he looked so rusty a lot of the time he took to the pitch.

His main issue was a lack of mobility and without quality deliveries into the box for him to try and get on the end of, his presence in the black and white was pretty much a massive waste of time.

Fans have not been quiet in their opinion on how the club have gone about the decision to release Carroll. No word from any of the official sources or a simple goodbye message is typical levels of communication that we have become accustom to over the last few years.

At the very least this is what Carroll deserves given his efforts for the club.

Other senior players that have been shown the exit door include Christian Atsu and the rarely seen Henri Saivet.