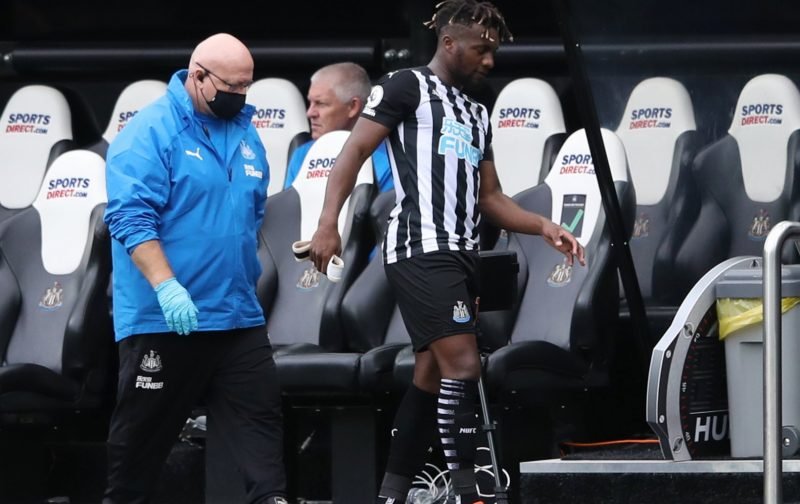 After such a strong debut campaign for Newcastle United, it’s time for Allan Saint-Maximin to get up and running, though the visit of Burnley tomorrow night is not the game for him to start shining.

Newcastle’s talisman last season is in contention for tomorrow evening’s tie after sitting out the last three games nursing the ankle problem that saw him taken off against Brighton and, while it is good news for a side struggling to create much in the way of goalscoring chances, a mixture of his injury and the Clarets make this a game he should sit out, at least from the start.

Indeed, brought back too early last season, the Frenchman succumbed to another ailment during the August 2019 win over Tottenham and subsequently missed a further 22 days of action, in which there were three games according to Transfermarkt. Interestingly, journalists such as the Athletic’s Carl Anka have also raised concerns over his fitness situation at St. James’ Park.

Given his overall importance to the side (his 7 goal involvements last season was bettered only by Jonjo Shelvey), Steve Bruce can’t afford to play fast and loose with him. Even aside from goals and assists, the 23-year-old’s 4.7 dribbles per game on average last season (WhoScored) was a crucial attacking weapon and capable of getting the team up the pitch quickly – a crucial albeit obvious facet of those looking to play on the counter – with no one else in the side coming close.

Long-term thinking is important here. Burnley haven’t enjoyed a good start to the season but are a compact side who don’t tend to allow themselves to get into positions from which their defenders can be dribbled past. In fact, only Phil Bardsley of their regular defence has allowed this on average once a game and – aside from Charlie Taylor (0.5 over the same period) – no other defender has been dribbled past at all in the Premier League. Considering the lack of space in which to operate, it doesn’t appear to be the natural game for Saint-Maximin to make his comeback – especially with three tough ties against Manchester United, Wolves and high-flying Everton on the horizon.

Though the recent games against Brighton and Tottenham have been tough to watch (there hasn’t been a single shot on target from open play in just over 180 minutes) Andy Carroll could have a role to play. This season, he’s won 7.3 aerial duels on average a game and, while Sean Dyche’s men might have a slight reputation as a long-ball team, have struggled in that department this season. None of their defenders can match how dominant Carroll has been in the air this season (Jimmy Dunne and Kevin Long have won 4 on average over the same period) so perhaps he can have a touch more success in bringing others into play.

Few would doubt the fact that Saint-Maximin makes Newcastle United a better team. Still, in this particular circumstance and with long-term thinking mind, tomorrow is not the game for him.