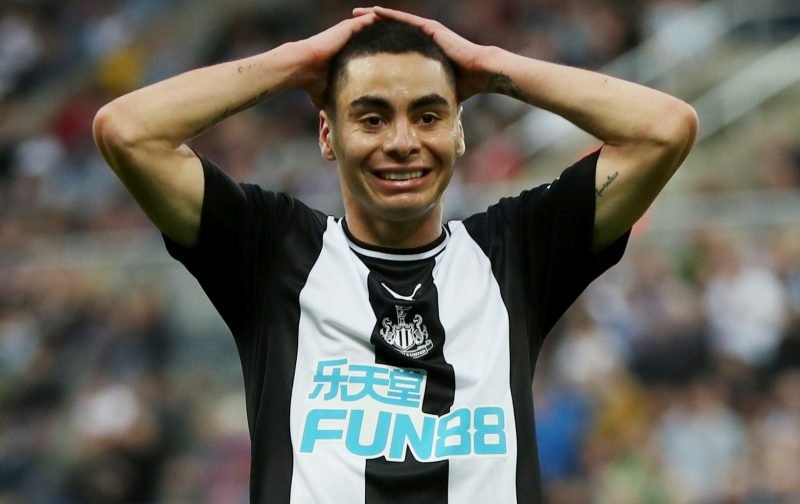 “Cabbage head has destroyed him” – A lot of Newcastle United fans are confused at a report in the Daily Star that claims Miguel Almiron will be dropped for Newcastle’s game with Leicester City on Sunday.

An exclusive from the paper states that Almiron will be dropped after a poor start to the season.

The Paraguayan has shown flashes of his skill and technique, but it appears that Steve Bruce is unsure how to get the best out of him.

Still, the former Atlanta United man is Newcastle’s most direct attacking threat, and I cannot see Bruce dropping him.

Christian Atsu has had a quietly impressive start to the season with two assists, but if anyone was to be replaced, I would assume it would be him to make room for the explosive Allan Saint-Maximin.

Certainly, these Toon fans are baffled at this report, and they hope it is not true.

Miguel Almiron is set to be dropped for #nufc’s trip to Leicester on Sunday for the first time since he joined the club, with the Paraguayan still searching for his first goal. [Daily Star]

That’s right Steve drop Almiron because you can’t figure out how to properly utilise him. This is going to end up like McLaren where he kept rotating Wijnaldum and Ayoze on the LW.

Cabbage head has destroyed him

Actually feel sorry for the lad, looked lethal in a structured system last season, just looks lost in this years free for all. Should of tucked that chance away last week like, no excuses there.

Some Newcastle supporters do not want to see Almiron dropped and they blame Bruce for his decline.

How about we drop the manager instead..

Should drop Bruce the bloke is clueless

Other Toon fans want Bruce to be dropped instead – as their patience wears thin with the Newcastle boss.